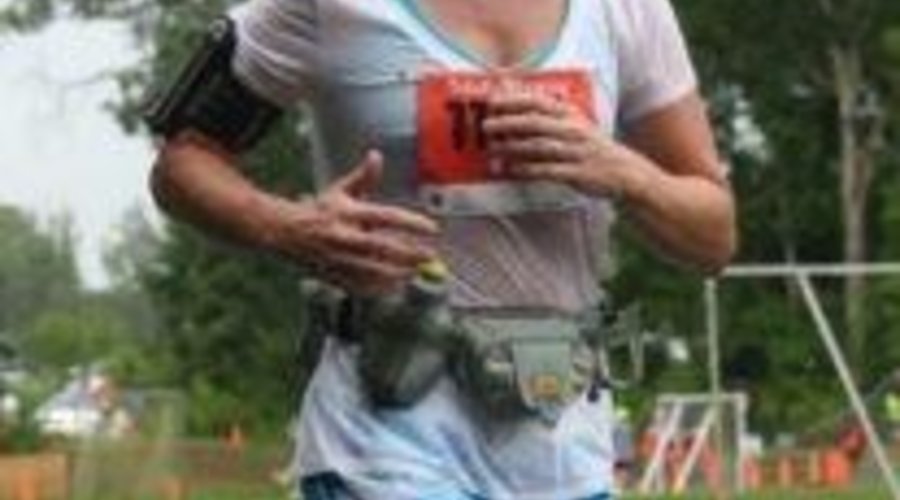 Totally Runner: An Interview with Joan I am a 54 year old chiropractor in private practice for 22 years, I just got married, less than 2 years ago, yes…I am a late bloomer. I don’t have kids, married at 52, that explains that! I live in Northern Illinois and I know about Totally Running, because I ran a race in Cumming, Georgia (07/04/2015, yep…the one that almost got flooded out and reduced to 10 miles) and I picked up my race packet in the store. I have 2 dogs, 3 cats and 2 horses. In addition to running, my husband and I are on a quest to find the perfect beach vacation getaway…contenders are Jost Van Dyke, Dominica, St. John…we will keep you posted!

How long have you been running?

I have been running for 4 years steadily and for my whole life off and on since about age 15.

Were you athletic at all before you started running?

Why do you run?

So many reasons…stress relief, fitness, solitude, problem solving time…for the fun of it!

What motivated you to start running?

I ran a 5K to help support a friend who was trying to lose weight and get in better shape, it was November. I found a flyer on my truck when I got back to it for a Survivor Series where you run a 5K in December, a 10K in January, a 15K in February and a 20K in March and I decided, since the 5K was so much fun that I would give it a try. The race organizer of the series sort of dropped the ball at the 15K and the 20K didn’t even happen but I ran on that day anyway and really liked that distance, did a ½ marathon a month later and told my husband that I wanted to do one in every state, he said “ok, let’s go” and we are! That was 3 ½ years and 31 States ago!!! Do you remember the first moment you felt like a runner?

I think I was talking to my Dad on the phone and cut the conversation short by saying, “well, I got to go, Dad, I have to run a quick 10 miles”

What has been your favorite race and why?

That is a tough one…Red Rock Canyon, outside of Las Vegas, Nevada was the most beautiful! It was a HARD race though, altitude and 6.5 miles of up followed by 6.5 miles down…but, let me tell you, the sun came up while we were getting ready to go and the sun light on the mountain face was unbelievable! It looked like a painting!

Favorite spot to run in Georgia?

Hahaha!!! Well the ONLY spot in Georgia I’ve ever run was the Greenway during the “We The Runners”, July 4th, 2015 race, near Cumming!!! It had flooded so much the week before that race that it was cut to a 10 mile race. My husband and I scrambled and I told him I would run through the finish line, throw him an empty water bottle and my medal, take a lap while he filled my bottle and head out a mile and a ½ and turn around and meet him back at the finish. I ran onto the Greenway to see if it was really flooded…it was! That last 3 miles I ran in a lot of water, but I was already wet from the rain so it didn’t matter!!! We got lucky, running in Georgia in July could have been a lot worse, rain, on that day, was the best scenario!

Most embarrassing moment as a runner?

Indiana! It was my 4th ½ marathon and my first trail run. I caught my foot on a root running on this single track in the woods and did a full on face plant…yard sale of water bottles with two runners right behind me to witness it! Awesome, lol!!!

What was the last race you ran and how did it go?

That was Massachusetts and it went great, it was the perfect temperature and it was the first time I had ever run a 7 lap race, I thought it would be boring, but it was run through a beautiful park and after the first lap, you really knew exactly what to expect for the rest, kind of easy to let your mind wander and enjoy the day!

What are you training for now?

I am running a ½ marathon in Durango Colorado the end of this month. It is high altitude there (7500 ft) so I will be out that way for a few days ahead of time to acclimate a bit. I am looking forward to the scenery, but my crew (my husband) is looking forward to San Juan Brewfest that is held in Durango later that same day!!!

I typically run 3 times a week, a short 3-5 miles, a medium 5-7 miles and a long 9-13 miles. I run the long run in the morning and the other runs after work. I don’t train with anyone, my schedule is too grueling for that, I am running in the dark sometimes. I stretch daily and a little more on running days. I focus on gluts, hip flexors, quads and hamstrings, I also do abs everyday, it helps with back pain while running that long run. I eat a pretty clean diet 80% of the time, the other 20% is relatively good, with a cocktail or a waffle thrown in there for fun!!! I have a training plan that pencils in Tuesday, Thursday, Saturday runs with cross-training on Wednesday and Friday (usually bike or walking). I have to be flexible…you know, life gets in the way sometimes. I also ride my horse on Saturday and Sunday for at least 90 minutes, sometimes as much as 3 hours…I don’t lack for physical activity most days. I do take Mondays off!!!

How are you improving on your past training?

I know it doesn’t sound like it, but I rest more than I used to in an effort to ward off injuries and I listen to my body better than I used to. I may have a run day scheduled and just feel too sore to do it, so I’ll spin and binge watch Mistresses instead!

How many miles per week do you average?

What are your lifetime running goals?

A ½ marathon in every state before I age out of this AG!!!

How do you measure success as a runner?

Two ways: Am I having fun? Did I finish?

What’s your philosophy on diet and nutrition?

I sort of already covered that (80/20 waffle/cocktail story), but I left out the detail on nutrition during running. I have found Hammer Nutrition to be my go to for running products when training and racing. I use Heed before racing or long runs in the heat, I use Gels at 5, 8 and 10 mile markers during racing or training, if I run in the intense heat I use Fizz in my water bottles, all or a few and I’m a big believer in Recoverite directly after a race. I’m super lucky in that I don’t usually get sore after a race. But…I also train pretty well for races. This is what works for me, it is, by no means, the only way to get there!

Bonzai burger at Red Robin with broccoli and a Blue Moon!!!

What’s the one thing that works really well for you?

It probably is carrying in my own water…it puts my mind at ease that I’m not going to have a water crisis at any time during training or a race. I may even supplement with water station water on really hot days, but mostly I use the water at the stations to pour over my head and that way I save my water for drinking. I know it is extra weight on my body, but I’m so used to my water belt that I don’t even notice it…let’s face it, I’m not on the Olympic running team. This is a sport based on participation not winning!

What’s your favorite piece of running gear and why?

What shoes are you running in now? What do you like/not like about them?

Asics, gel exalt 2. I have had very little foot trouble in running with this shoe. As I get older, I’m probably going to have to get fitting and do that whole thing, but for now, I’m doing well with this model. I have 2 pair that I rotate through and I keep track of how many miles I have on them and dump them when I hit 250-350 miles depending on how my feet are feeling!

Has running affected you in any unexpected ways?

How do you stay motivated when you don’t want to run?

How have you invested in your knowledge of the sport?

I read a lot about running, but I have to admit, I take much of what I read with a grain of salt. I’ve done a lot of trial and error and have found what works for me. I don’t have a ton of time to do more than that!!! I’m lower tech than a lot of runners, I use my iphone, headphones and Runkeeper to track my runs and play music for motivation.

Heat, I can always pour water over my head!!!

Hammer gels, they are the bomb!

My favorite thing on the internet is…..

Doing research on the next race and the next years races! It is so fun to plan where my husband and I are going to go next and what we will try to fit in the world wind tour of the US one ½ marathon race at a time!!!